Not “I hate chocolate.” Though I will truly never say that!

The three little words I never thought I’d say are: I miss Vegas.

Yup, I went there.

I haven’t had horrible Vegas experiences. They just haven’t necessarily been all that great.

My first time I went with my future two best friends and a group I didn’t know at the time. The cops got called on our room the first night, and then we couldn’t get in anywhere to dance on the second night. Disappointing, but we did make some hilarious memories. And the highlight was definitely getting into the Wet Republic pool party! 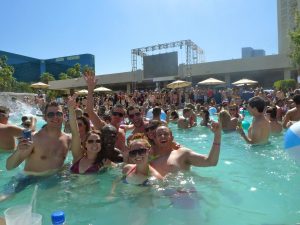 My second time was this past summer for BlogFest. Being in Vegas for a conference is an interesting thing. There’s all these shenanigans going on around you while you’re trying to GSD. Again, we couldn’t get into a club for Alyse’s birthday (we were six girls!!), but we got to experience a little of off-the-strip Vegas. We went to an amazing dinner for Alyse’s birthday, and then Jamie, Nic, and I got to explore the arts district a little while waiting for our flight. 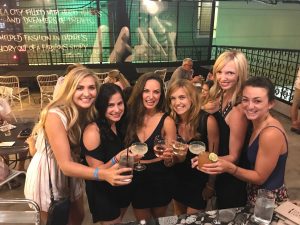 All in all, two solid trips. But I just never really wanted to go back. The essence of Vegas isn’t really my thing. Though I love dancing, the out-of-control, non-stop craziness is hard for me to handle.

So when Caitlin told us she wanted to do Vegas for her 30th birthday, I reluctantly got on board. Turns out, it was one of the best weekends ever!!

Nic and I flew down from Portland together to meet Caitlin, Kevin, Ashley, and Nevin on Friday night. We met up with them in Old Town, my first time in that area. 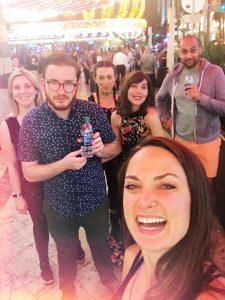 Though we didn’t stay long, we saw what would end up being probably the mascot for the trip. Outside one of the casinos on a pedestrian walkway was a live show and a whole crowd dancing. Our crew made sure to point out two particular characters to us: a dancing baby and nun. Initially the baby was the standout, a full-grown man wearing a large baby head and tighty whities and dancing about. Next to him was a topless woman dressed as a nun with her breasts out and medical tape over her nipples. She wasn’t moving at all, not even making a facial expression, except for a very subtle shimmy that caused her large breasts to jiggle. Apparently she had been at this for hours. It became our dance for the weekend.

We headed back towards the strip and went to Ellis Islan, officially Ellis Island but the “d” in the lighted sign was out, for karaoke. It was quite the wait for our crew to get their turn, but worth the wait. Especially with the people watching, highlighted by an adorable couple singing to each other, a girl that thought she was an American Idol standout (and wasn’t), an older guy singing Get Jiggy Wit It, and, of course, a Michael Jackson impersonator.

I think we did us proud, making it to 4:30am. Apparently we were on newborn time, as we got to talk with Jamie when we got back to the hotel while she was up for a middle of the night feeding with Colby.

We kicked off what would turn out to be a very musical day with a song:

And then after many issues and back-and-forth trips to the room (Vegas is so strict about things like water bottles and dress codes!), we made it to the pool party at our hotel. Much like my first trip to Vegas, the pool party was SO MUCH FUN! Sunshine, music, dancing, people – everything I could hope for on a Saturday afternoon. 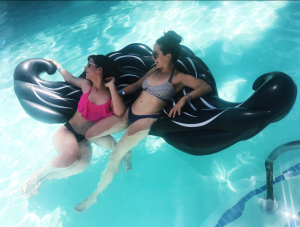 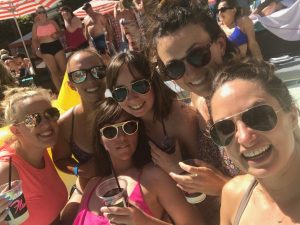 The next hours passed in a blur. We got ready quickly and walked to the neighboring building at The Flamingo to have prosecco in Nevin’s suite.

Did I mention we were NOT in the bougie newly-redecorated wing at The Flamingo? The halls were completely devoid of decoration, the bathroom light was broken, the window looked out over a white cement roof… 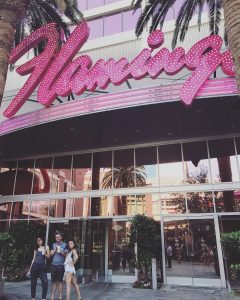 After prosecco, we made our way to the Bellagio to take photos. Because duh. 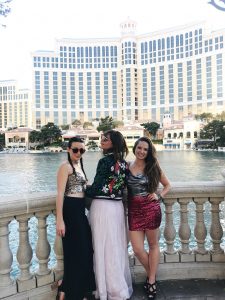 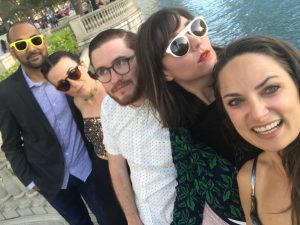 We met up with the rest of our 11-person party at the show. Oh yeah, did I not mention the impetus to the trip to Vegas was seeing Elton John?? We saw Elton in Vegas, one of the last shows of his residency there. Another piece of proof of Caitlin’s psychic abilities: she announced this is what she wanted to do for her birthday just a few days before Elton announced the end of his residence. 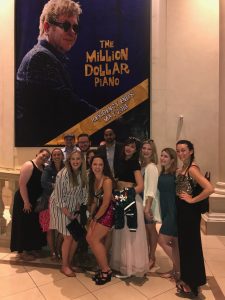 The show was incredible! Coming out in a taupe sequined cape, he first let everyone know that it would at times seem as though he was looking right at us, but that was not the case at all because of the lights. hah! He proceeded to play for 2 hours straight, ending with an encore of the Circle of Life and donning a pink sequined cape. 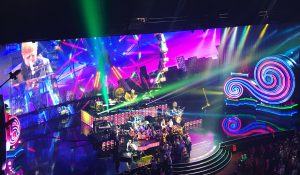 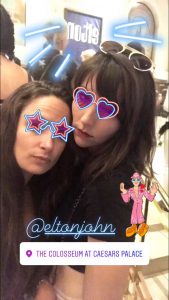 Dinner was a quick affair, with the main goal of going dancing driving us. After a failed attempt to get into Chateau, we made our way over to Hyde, the club in the Bellagio, and one I’d been to with Jules and Ella years ago. Even with a large group, and some of our guys wearing jeans, we were able to get in quickly. Caitlin places the root of this success on her sequined parrot jacket. She claims that the club promoter at the door scanned it and then immediately said he’d get us in. Can you blame him? 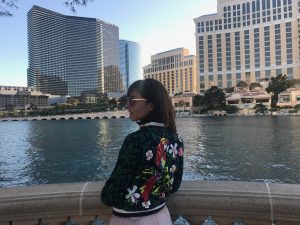 We spent the next hours in a haze of flashing lights and bumping music, breaking. it. down.

Around 3am I had to call it a night. I wasn’t the only one, with some of our group already departed. But Caitlin, Nic, Nevin, and Ashley migrated to the after hours club, conveniently located in our hotel, and made it to dawn. Literally, they came back to our room after they’d had breakfast and woke us up at 9am. Nic crawled in bed with me proudly showing me the pictures they’d taken at an early-morning photo shoot they’d had, but I struggled waking up. “I want to show you these photos! Oh, your eyes are closed…” 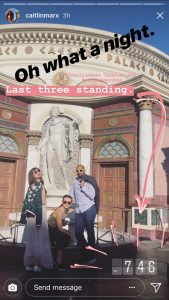 We made it out of our room in time for our checkout time, but our flights weren’t until late that evening. The struggle was real. 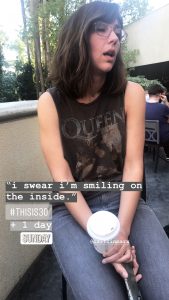 We decided going back to the pool and curling up on loungers was the best idea.

The unfortunate mascot of the afternoon was this beach ball… We’d staked our claim on a group of chairs in some partial shade by a small pool a little bit away from the dj party we’d thrived in the day before. However, a group of guys was playing with a large beach ball, attempting to keep it in the air. For hours they did this, very loudly and with a lot of splashing. It was rather disruptive to the relaxing sunshine session we were hoping for…

We grabbed a late lunch and head to the airport, spending a few hours waiting for our late flight out. The well-earned struggle continued. Moral: maybe go ahead and spend the extra money to fly out late morning… 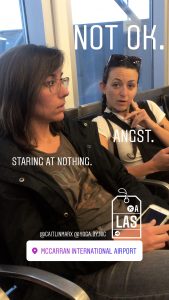 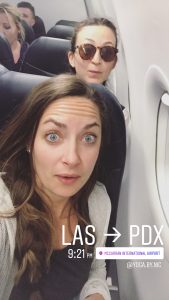 Despite the struggle that was Sunday, and Monday, the weekend was a huge success! So many laughs, so much dancing, a fair share of sunshine… The perfect components to a solid Vegas weekend. 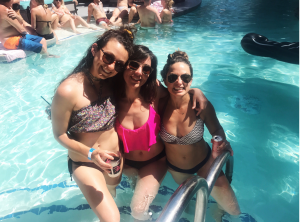 I was asked upon my return if I would ever go back. After my previous two trips, I always said no. But this time around I couldn’t answer so quickly. It still wouldn’t be my first choice, but after such a ridiculously fun weekend, I couldn’t say “no.” The conditions would have to be there: a good group, a show, time at the pool, dancing. I think we also learned that we really need to make a plan, to get tickets to djs at clubs, to pick out where to go ahead of time, etc. 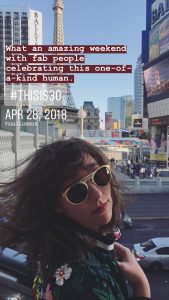 Looks like I’m not the only one either. Caitlin just saw that Queen is playing in Vegas in September…