I couldn’t tell you what happened to March. Or even to January and February, too. Time is just flying by, with no slowing down in sight. So let’s chat about everything that’s been going on…

At the beginning of February, we went on our annual friends trip to Bend. This year it was a little different… There was pretty much no snow to go skiing. Two of our party were preggo. And the Olympics kicked off that same weekend. Though we did get in hikes / runs, it turned into a marathon weekend of lounging and eating. So restorative and lovely! 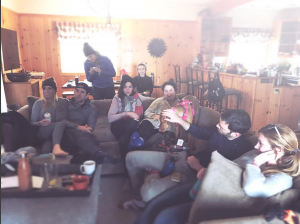 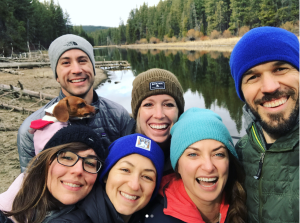 It seems we’re all reminiscing over this awesome weekend! Jamie went down memory lane last week, too. More on this weekend to come!

There was no traditional shower with tea sandwiches and candy-filled diapers for this crew. To celebrate Danger’s impending arrival (he’s due in less than 3 weeks!!), there was a legit throw down. Including boys, a taco bar, and tequila cocktails. 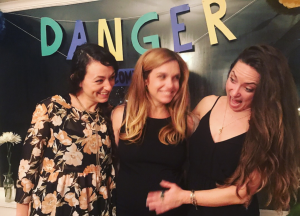 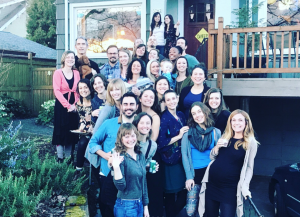 Alyse and the fam came to town for Danger’s party. Though it was a whirlwind weekend, we snuck her away to indulge in all the biscuits! 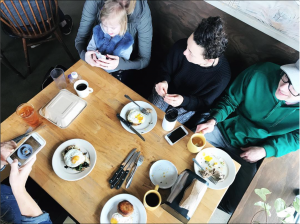 I got to sneak home for a long weekend right before my mom’s birthday! A few days of solid family time couldn’t have come at a better time! 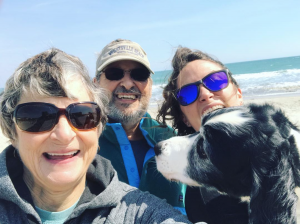 My dad is doing well! After having an infection right after Christmas, his counts are still rising, just very, very slowly. His immune system is still very compromised, but he has the “ok” to go outside without a mask on and walk Tori by himself (aka, pick up her poo with gloves on). Go Daddy, go! 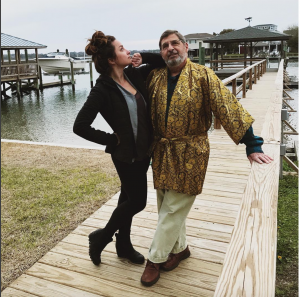 Things have been POPPIN’ at Flex & Flow lately! We had our last Flow & Glow class of the season. 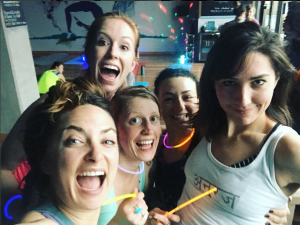 One of our student’s new puppy has completely taken over and won the hearts of the whole tribe! Hello, Winnie the Vizlsa! (Abbie‘s not too sure about this still…) 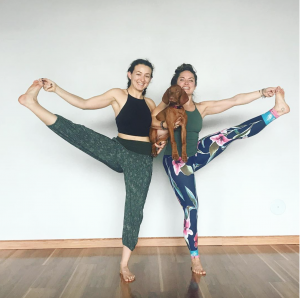 All the handstanding! We’ve been working handstand in a lot of my classes (which means ALL the core!), I finally landed a handstand-to-crow transition, Ian lead a press-up workshop, and I led my own about falling out of handstand yesterday. We’re definitely a crew that loves to balance on our hands!

Omg yoga BREAKTHROUGH tonight! . . Over the last few weeks, we’ve been working handstand into crow and forearmstand into baby crow transitions a lot. The latter I can finally nail most of the time, but I still drop my legs down before I hit crow coming from handstand. . . All last week in my classes we worked core, specifically knees into chest variations. We did plank tucks and pikes on gliders, plank crunch and push up combos, pendulum pose and boat pose combos, and half crow / half pendulum and one-legged crow variations. All the burn and the sweat WORKS y’all! Tonight I demoed handstand into crow for my class, fully anticipating not being able to make it all the way (just watch my video from a few short weeks ago!). And I surprised us all by getting it! And I further surprised myself by doing it again for the camera after class. Guess it wasn’t a fluke after all. . . Get ready y’all! We’re on board the core train to keep this momentum going!

And we’re getting ready for our next HIIT & Flow teacher training in Arlington, WA! It will be at Stillaguamish Athletic Club May 18-20. Check it out! 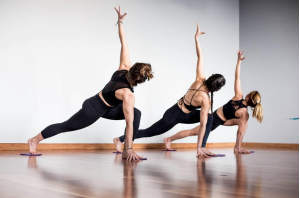 End of an era

There will definitely be more on this later, but one of the biggest things of late is that Caitlin has officially moved to Chicago. She left Saturday morning, after I finished packing up her car and we cried together on Hawthorne Ave. So we had a rager night out for her, tons of drinks and eats dates, and lots of packing shenanigans. 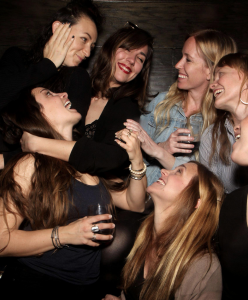 I also moved into a lovely house in NE Portland, and am adjusting to a new neighborhood and living with new people (and kitties). Of course I got sick right in the middle of moving, which definitely affected the last two weeks. Less energy, no wine, no voice… Not the best way to send Caitlin off and start a new situation for myself.

Hit the trails and the slopes

I did get a ski day in at Bachelor when we were down there, and got my very first day in at Mt Hood when a friend was down visiting from Seattle! I also snuck in a few more solo uphill ski days when I could. Gotta get those turns in when and while I can! 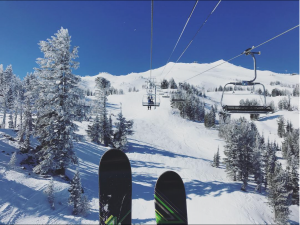 Between trips and moving and sickness, I got on the trails when I could, too! But it’s been sporadic at best. I have at least two races coming up this spring / summer, so I’m definitely needing to start buckling down on my training. 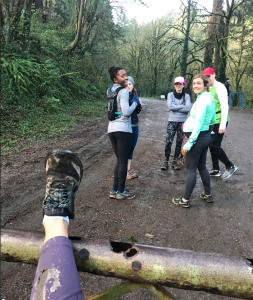 Thank goodness I have Gixo’s 5K training plan to help me get my running act together and get ready for all the running to come!

The funny thing about this time is that it was supposed to be somewhat down time. I have a crazy-busy April thru August, full of travel and events. So my goal over the next few weeks is to try and settle into my new house, get healthy and back to my sweat routine, and enjoy being at home while I’m here.