Ok, I didn’t go out on a date with a full-blown nudist. We were in a bar in Portland. Wearing many, many layers of clothes. Though it might not be that far-fetched since I have been kicked out of a coffee shop because my date was barefoot and have been on a second date to a nude beach (our group was in bathing suits, for the record). And have been known to strip down on wilderness dates with girlfriends…

A couple of years ago I went on a blind date (aka Tinder date). Obviously it didn’t work out since I’m single. It was mostly ok except for one thing he said that kind of irked me.

We were talking about running. More specifically trail running, OSI.* Turns out my date was a fan of naked trail running.

My initial reaction was, “Ouch!”

When he asked what I meant, I bluntly said it freaking hurts when I don’t wear the right sports bra while running. Things… bounce. Wouldn’t it be a similar situation for a dude?

[I’m not enormous. Nor am I flat chested. I fluctuate between a high B to low C cup. Relatively normal.]

Dude’s response was that it didn’t bother him and then went on to say that that’s why most professional female runners were flat chested.

Well, now with 20-20 hindsight, I have plenty of choice responses for him. Which I should have given before doing this…

The reality is I’m too polite and hate confrontation too much to have said what I really wanted to say. Which is, “You don’t know me!”

Ok, yes, most of the professional (aka Olympic) runners I see are long and lean. But the way he said it was so definitive. As if me with my C-cups couldn’t be a real runner.

Self Magazine just posted this amazing editorial article entitled, “My Weight Has Nothing to Do With How Good a Runner I Am.”

Allie Kieffer (@kiefferallie), who placed fifth in the 2017 New York City Marathon and ran her fastest marathon time ever at 2:29:39, has been told for years that she’s too “big” to run—that somehow her weight defined how good of a runner she was. Throughout her athletic career, starting as early as high school, Kieffer was surrounded by comments about her size. People often said they were surprised that she could run so well for being “bigger” or would note that she was “strong”—a notoriously condescending word in running culture. Kieffer recently wrote about her relatable and frustrating experience with body-shamers in the running world and how she learned to overcome the noise. Tap the link in our bio to read her full essay. 📷: @benkophoto | #TeamSELF

Allie was a D-I athlete, and felt good about her body. She felt beautiful and curvy off the track, but often was greeted with disdain for her physique when it came time to run.

“People often said they were surprised I could run so well for being “bigger.” Or they’d note that I was “strong,” a notoriously condescending word in running culture.”

She succumbed to the external pressures and committed to cutting weight, but quickly discovered what many other elite athletes also discover when going down this road (pun not intended but appreciated): this is NOT healthy. Many athletes develop eating disorders, following coaches’ dictates that runners have to be as light as possible in order to win races. In Allie’s case, it resulted in injury that prevented her from competing in the 2012 Olympic Trials.

Fast forward a few years and Allie is back to her naturally “strong” self and is crushing it!

Remember all the hoopla a few months ago about Shalane Flanagan being the first American woman to win the New York City Marathon in 40 years?

Well, Allie was right behind her. Just shy of three minutes behind her, to be precise. She finished fifth in the entire race, was the second American after Shalene, and PR’d by 26 minutes. Looks like being strong served her very, very well.

This isn’t a skinny-bashing party by any means. Shalene and Allie are both inspirational runners in my mind! This is a celebration of strength of all kinds and individuality!

I used to joke that I would put a picture of Gisele in front of me on the treadmill as motivation. The fact is that even at my most fit and most thin moments, I will never look like Gisele. Gisele and I are completely different people! Even though we both do yoga, box, and run. Our body types are just different, not to mention she has a foot on me in the vertical direction. It doesn’t make her a better yogi, athlete, or person than me because she’s long and lean. 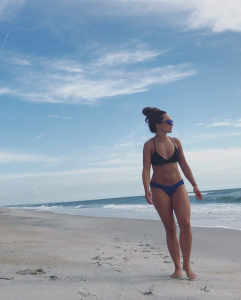 Around the time I was making this joke on the regular, circa 2007, I had a revelation. I got the flu and dropped weight really quickly. I remember my first day back to classes and catching a glimpse of myself in the mirror. I loved looking thinner! But then I couldn’t run for 5 minutes when I went to field hockey practice that night. I realized that I was a muscular fit person. I love running, and running gives me thighs and a booty.

I made the conscious choice that I would rather be fit than thin.

Thin or curvy, A-cups or DD, short or tall… We all come out of the womb with a genetic code that will determine a lot of our physical appearance. What we can control is living a balanced and healthy life! Training hard and being in shape for one person looks completely different than it does for someone else.

My issue isn’t with Shalene or Gisele. Shalene is a fellow Tar Heel ( and Carolina girls have to stick together). I’ve seen footage of Victoria’s Secret models eating doughnuts before a photo shoot. Some people are made long and lean, and my issue is not with them. It’s with the people that think athletes, even people in general, have to conform to a certain look. Runners are supposed to be long and lean? Marion Jones! Debate over! (Steroids issues and rumors aside…)

Yogis are supposed to be long and lean, too? Jessamyn is rocking the yoga world by demolishing the body type stereotype.

So in this year of being Limitless, I’m advocating for people not only accepting but absolutely owning and loving their bodies. Our bodies are capable of so much! Listen to them; they tell you what they want.

Eat well. Healthy and balanced meals are imperative, but still indulge and eat deliciousness. You can’t perform if you’re starving yourself. And life is just better with some ice cream every now and then. It’s a fact.

Train hard. (And rest hard.) For some of us, training comes a lot easier than resting. But your body needs rest, just as it needs the exercise, and overtraining is definitely a thing. I’ve come to discover my runs always feel better and stronger after a day or two off.

Feel good in your own skin. Do what you do to feel your best self, not someone else’s. I love the way running and yoga and skiing make me feel (and I’ve definitely come to love my mountain booty). I don’t do them because I think it’ll help me look more like Gisele.

Working on self-love and being the best and healthiest version of myself that I can is a big goal for me this year and during our Limitless campaign. Recognizing that I will never look like Gisele doesn’t impose limits; it frees up any energy I would otherwise exert toward an unattainable goal and lets me dedicate that towards a goal I can actually work to achieve. Recognizing that our body types do not define us is one of the biggest steps to self-love and confidence that a person can make. 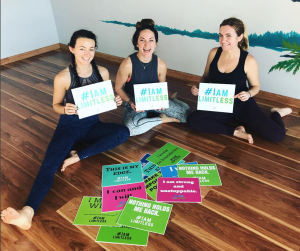 Join me on the journey! Join the #IAmLimitless challenge with Gixo and Fit Approach. We’re posting every Wednesday and Friday on @fitapproach to talk about all things badass and inspiring.

Disclaimer: This post was sponsored by Gixo. All opinions are my own. I truly appreciate all of the brands that support the Sweat Pink community.