Until recently, I’d only been to California twice. Once in college for a field hockey tournament in Santa Barbara, and another weekend in San Diego when I was debating where to move after Colorado. 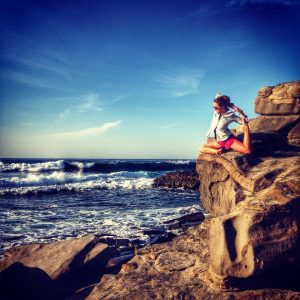 And yes, there were those two trips to LA for BlogFest. Except for one afternoon in Santa Monica, both trips were largely contained in the downtown area and convention center. Thanks to Caitlin, I know there’s so much more to explore outside of DTLA. But I’d say we definitely made the most of downtown! 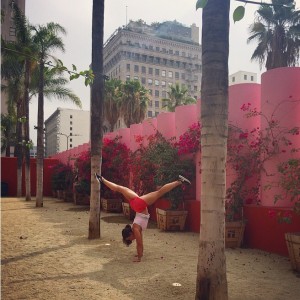 Speaking as a non-Californian, there seems to this aura around the Golden State, a California-versus-the-world mentality. I’m not saying that in a bad way, just that as an outsider that I’ve never really “gotten” California and it’s sunny aura.

When I think of California, I think of sunshine and palm trees, bikinis and blond hair, and celebrities and vineyards. 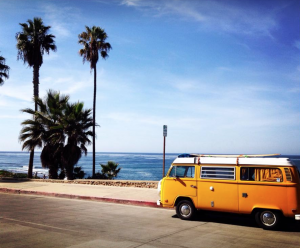 Yes, all those things exist in California. But there’s a lot more to it than that. I have lots of friends that are from, live in, or have lived in California. I hear the stories, but just couldn’t quite understand what made it SO special that so many hoards of people would live there and deal with the high cost of living, traffic, and drought.

I’ve had reason this year to spend more time in California and have been loving it! Without actually living there, I think I’m starting to get it. Sonoma in March was perfection. Sunny and 75 amidst the cold, rainy Portland winter was such an unbelievable breath of fresh air. I remember Nicci, who used to live in LA, telling me as we were packing up the car after the retreat and dreading returning to the gloom, “This is why people live in California.” Ah.

What wouldn’t be amazing about sunshine, trail running, and wine?

This past week we road tripped to the Bay Area for the Empower Race. Most people can’t believe that I’ve never been to San Francisco, and I’m right along with ’em. I was so excited about finally getting there with two longtime SF’ers. For our weekend, I got to experience the life of a California girl!

I feel like road trips are a very West Coast thing. I always think of winding along the coast on the 101 with the Pacific next to me and the top down, or driving through the desert with nothing but open road and cacti as far as the eye can see. Things are more spread out here. We have to drive longer distances to go for adventures. I myself have had some great road trips in Colorado, Oregon, Washington, Idaho, and Wyoming. But I always love hearing Caitlin tell stories of putting John Mayer and Tom Petty in the CD player and hitting the road for Santa Barbara and Joshua Tree. 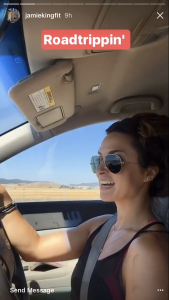 Side note, last week on the drive down I listened to my very first podcast, thanks to my podcast-loving partners in crime and road trip buddies.

It’s so important to stay hydrated while traveling. We made sure to keep ourselves well stocked with all the water and all the coffee. We made sure to bring some beans from our favorite PDX roasters with us. But never fear, Alyse, our resident coffee snob, made delicious coffee for us in Tahoe and we hit up some of the best places in the Bay Area for our caffeine fix (ahem, Philz!!).

Not to mention all the wine toasts along the way after long days of travels and sweaty days of running. 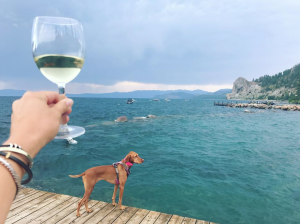 I did mention bikinis were a big part of my California vision, right? We made sure to strip down and suit up to enjoy some Tahoe sunshine. Major plus, it was National Watermelon Day, which we got to celebrate with a huge watermelon floaty and a mini beverage watermelon floaty. And of course we couldn’t leave out our everyday unicorn floaty. 😉 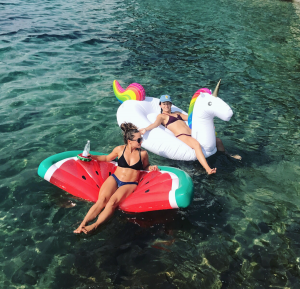 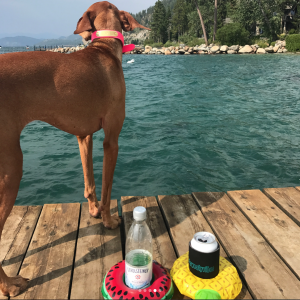 We made sure to get plenty of trail running in on our trip. In classic mountain form, our runs went straight uphill and then we got to stride it out on the way down. Talk about sweaty and dusty jello legs. 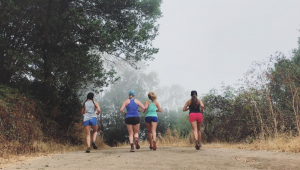 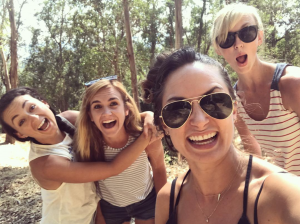 One of the best parts of California is the close proximity of mountains to the ocean, my one gripe about Colorado. We went from the beautiful mountains of Tahoe to the beautiful views of the Bay in just a 4 hour drive. 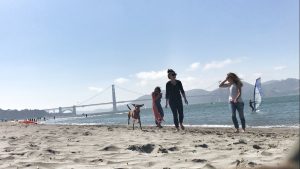 One of the highlights of the weekend was upon our arrival into the city on Sunday we headed straight to Off the Grid in the Presidio. The whole lawn is full of people stretched out on blankets with friends throwing footballs (which Abbie thought was a personal torture directed to her), puppies playing, and kids breakdancing. Not to mention eating amazing food from the food trucks that lined the entire lawn. 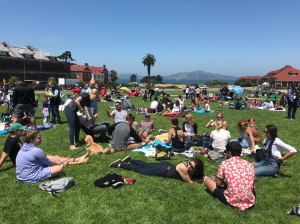 Yum, yum, and yum again. I’ve heard tales of the delicious food in the Bay Area, and I have to say everything was super delicious. We met up with our Sweat Pink squad for delicious small plates and drinks at MUA in Oakland, ate our faces off at Off the Grid, downed some of the best pizza in the Marina, and ended all the eating with a huge slice of toast topped with two poached eggs. 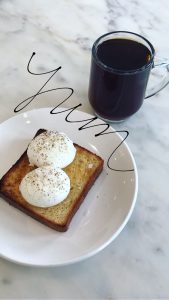 Special shout out to Nic, the queen of the toasts! 😉

A former self-pronounced city girl, I love the energy a city has to offer. A lot of people predicted that I would love San Francisco and the Bay Area, and I have to say that they were right. I loved the funky vibe, the delicious food, beautiful architecture. People were nice and everywhere was dog friendly. There was so much diversity and culture. Having trails AND the Bay on either side of the city was incredible. As a current self-pronounced mountain girl, it made me wish that I loved living in cities because San Francisco would definitely be calling to me… 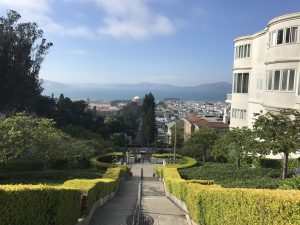 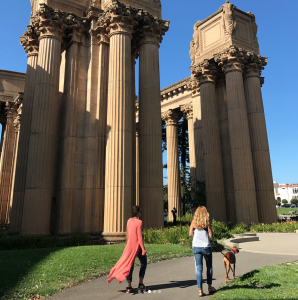 Sunsets over the water

Yeah, this is Lake Tahoe, but we still saw some beautiful ones over the Bay. I love those Pacific Ocean sunsets! 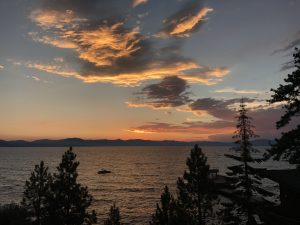 We met some amazing people this weekend! A distinct “pro” to being in a really crowded area. Off the Grid was an amazing collision of squads. Jamie, Nicci, Alyse, and I met up with Jamie’s friend CJ, who also ran with us that morning. We found our PDX friend Robyn and her boyfriend with their squad, made up of some people we know and some new people we got to meet. Four of Nicci’s good friends that live in SF also met up with us on the lawn. Throw in three adorable pups, and our giant squad was complete. 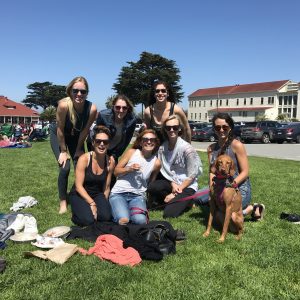 We got to reunite with and meet some amazing people at our EMPOWER Race Series. Sweating and smiling faces are my favorite! 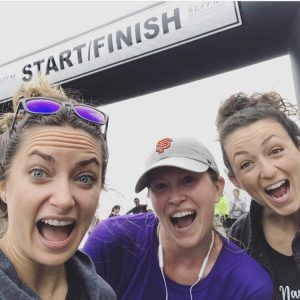 Seeing the crew that pulled together around the theme of EMPOWERMENT was amazing! Women of all ages came out to run 5k or 10k and do all the yogas together. We saw PR’s made, new poses attempted on the mat, people coming to the event stag that made new friends. It was truly an inspiring event. 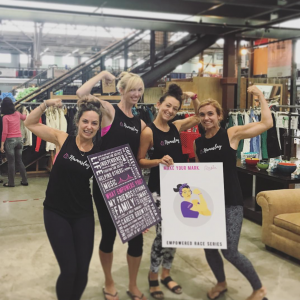 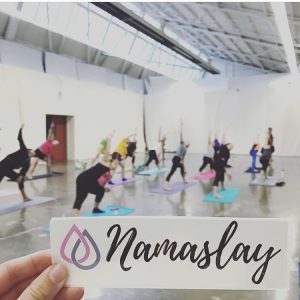 Love, laughter, and my ladies. 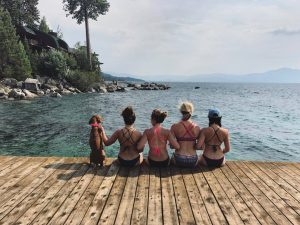 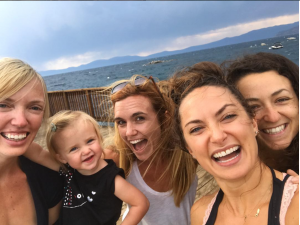