“Should we layover in Oslo?”

When we decided to travel to Norway, we wanted to prioritize the fjords, finding natural beauty off the beaten path. Of course we couldn’t resist spending at least a couple of days in Oslo along the way. We also figured it was a good chance to acclimate after the long flights from the States. 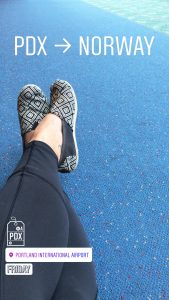 We hadn’t necessarily heard that much about Oslo. Actually, most people told us it was just ok, that we’d really only want to spend a couple of days there before moving on. So we had kind of low expectations for Oslo.

Despite all we’d heard, we loved Oslo!

I think we got an interesting experience there. Since we were visiting in July, their holiday month, the city was incredibly quiet. Nature is close to the outskirts and all the locals recommended getting out of the city, but we decided to stay put due to the next portion of our trip taking place in remote Northern islands. Quite a lot was closed, but we still didn’t have a problem finding things to do and good food to eat.

We decided Oslo was the European Portland. It had the best elements of Portland (a smaller sized city, cool architecture with natural elements throughout, great food, cool-vibe restaurants, a surprisingly hipster population, so many bikes all over town) with that classy European veneer. We felt incredibly comfortable there, and would definitely visit again. Especially as a stopover to acclimate after a transatlantic flight before continuing on.

12 p.m. Land at Oslo: Very similar to PDX, the airport is super easy (and incredibly beautiful!). We found our way to the tram that takes you to center city. From there it was a 20 minute walk to our AirBnB. We were amazed with how quiet and clean everything was.

2 p.m. Nap: Normally we both push through time change, jet lag, and travel fatigue. But after arriving at Thor’s incredibly beautiful and Scandinavian-modern apartment, we decided to lie down for a little while. The main impetus for this decision was that we knew we’d have sunlight until 10:30pm, and wanted to go for drinks at least after our 8pm dinner reservation. 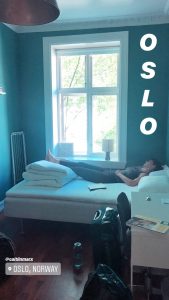 4 p.m. Neighborhood excursion: Feeling refreshed after a nap, we intentionally traversed the city towards the sculpture park. We of course immediately found coffee.

We traversed through a picturesque little local cemetery.

We also stumbled upon the Royal Palace. 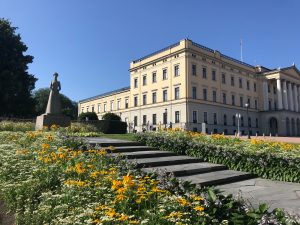 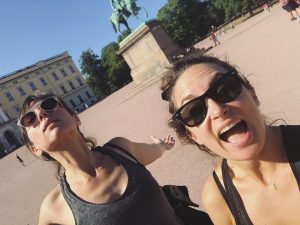 5:30 p.m. Vieglandsparken: Frogner Park is the city’s largest park, with a permanent art installation by Gustav Vigeland. It is the world’s largest sculpture park by a single artist!

We first ambled along a bridge lined by bronze sculptures, each one of a different subject. Some single figures, male and female. Some were in couples – men and women in amorous positions, with children… 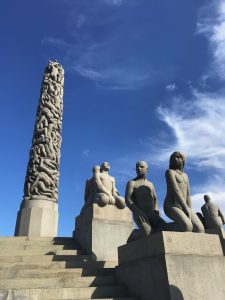 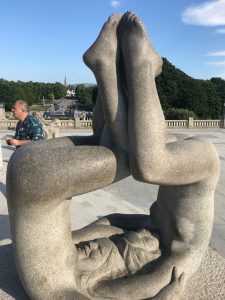 Turn to a more Greek style for these wrought-iron gates. 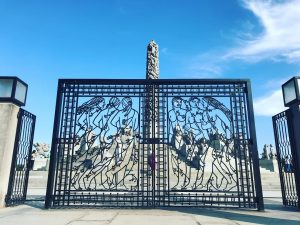 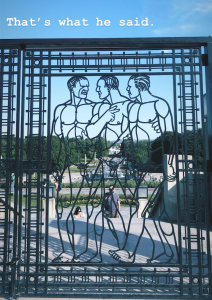 We discovered some adorable parts of Oslo walking back to Thor’s to shower up before dinner. 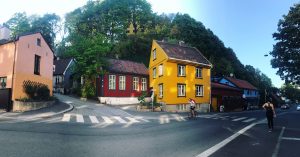 Including discovering that we basically had found ourselves staying in the best part of Oslo: Grünerløkka! 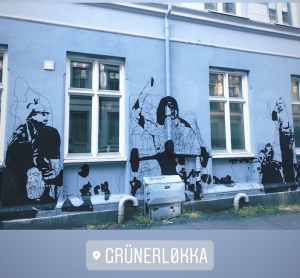 One of the few plans we had was dinner at BAAS. Of course I let Caitlin take the lead on this, duh! Per usual, her instinct did not disappoint. We had a delicious dinner, with a picture of Jerry Seinfeld looking over us the whole time.

Funny enough, my friend Taylor has been to Oslo and had her birthday dinner here while visiting. Small world! 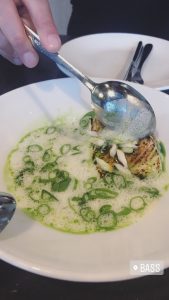 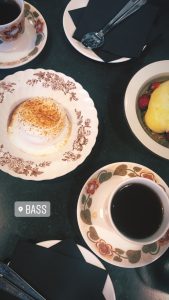 We had every intention of making it to a show Saturday night. Which we knew was pretty ambitious to plan that on the night of our arrival. After a lovely dinner, we didn’t want to go to bed yet but we didn’t necessarily feel up for a show. So we took our lovely young server’s recommendation for a new, hip neighborhood bar.

After a short walk up the street, marveling that it was still twilight out at 10:30 at night, we stumbled upon probably one of our favorite finds in Oslo. Aside from the older drunk gentleman that couldn’t understand that we wanted to enjoy our wine alone and accused us of not being proper tourists by saying “no” to wanting to talk with him, we had a lovely evening in a new, hip bar surrounded by locals. 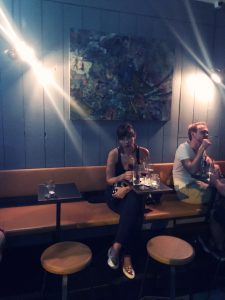 And watching a bartender that looks like Bob Ross from afar.

11 a.m. GRÅDI: After sleeping in a little bit, we walked just down the street to a coffee and brunch spot. 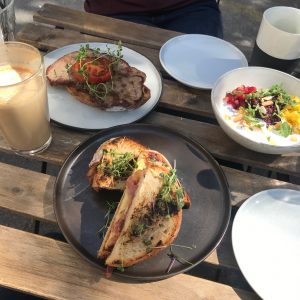 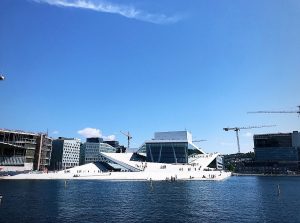 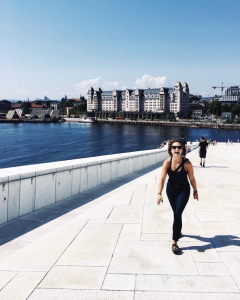 We attempted to go to the mini bottle museum in the afternoon, but discovered it was by appointment only. So we made our way back up to our apartment, making a few stops along the way for juice, coffee, and an afternoon snack. 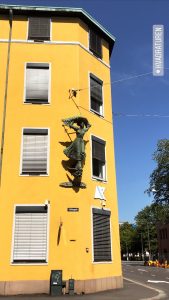 5 p.m. Blå: We walked down to Blå by the river, wanting to make it for the afternoon jam session. 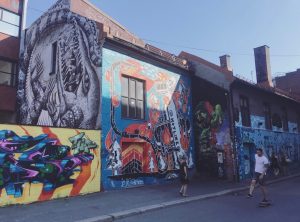 Though there ended up not being a band outside where we were sitting, we loved sitting out on the packed patio! Turns out it was a pretty popular spot, and the crowd there made us feel like we were back home in Portland. 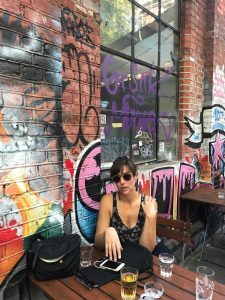 7:30 p.m. Villa Paradiso: The only problem we had with the city basically being shut down was for dinner Sunday night. Most places that were open in July had closed by the time we finished our drinks at Blå. Luckily we found a great pizza place in our neighborhood. Followed by ice cream from a nearby ice cream truck.

9:30 p.m. Albatross: Back to “our” bar for drinks after dinner! We loved that local-esque feeling when we went back to the bar from the night before and the bartenders remembered us and our drink orders! 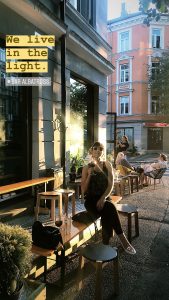 7:30 a.m. Oslo Central Station: After an amazing weekend in Oslo, it was time to head north to the land of the vikings and fjords! 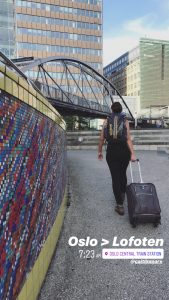 All in all we had an amazing time in Oslo, and would go back in a heartbeat!

Caitlin’s 5 words to sum up our time in Oslo:

Oslo, I have a feeling I’ll be seeing you again… 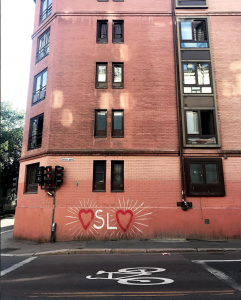 Part 2 to the Norwegian sojourn in the Lofoten Islands is coming soon! Stay tuned!