For years I’d been a runner, mostly playing sports and training for those sports. But I ran a lot.

Even though I’d exercised, trained, and been very active for most of my life, I thought I maxed out at 3-4 miles running at one time. Even though field hockey players run 6-8 miles during the course of a game, I just thought I’d never be one of those people that could run long distances.

While living in Sevilla, I loved running around the city as a means of exploration. And staying fit while eating all the yummy Spanish things! I was saying “yes” to pretty much everything while I was there: trying all the food things (anybody ever have cola de toro? It’s bull tail!), weekend trips with people in tiny Andalusian towns, evenings out to see flamenco, grand adventures to Morocco… 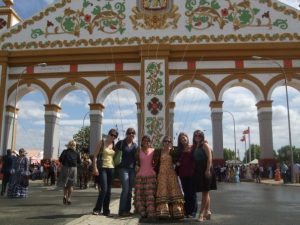 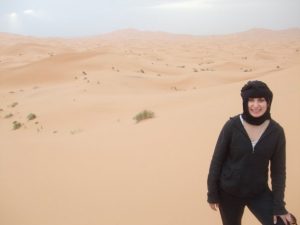 So when a group from my program decided to run the Lisbon Half Marathon, I hesitantly said yes. Hesitant about the running aspect, not about the trip to Lisbon.

Six weeks out, I had registered for the race and jumped on board my friend’s training plan.

This was before Strava, Google Maps, and smart phones. So I used MapMyRun to plan out my routes once my mileage was increasing beyond my normal loops. For the most part, this was a pretty painless process. I got to explore new areas of the amazing city in which I was living, which was luckily also flat and at sea level.

The only issue I had one day was taking the wrong connector street. Barrio Santa Cruz is literally the ancient part of the city where the old city developers hardly used a grid plan. Streets are very narrow and wind around in a very confusing manner. I knew I was headed up to a major street that divided the old and newer parts of the city, so when I couldn’t discern which street I really needed to turn on, I just kept running in the “right” general direction. Well… 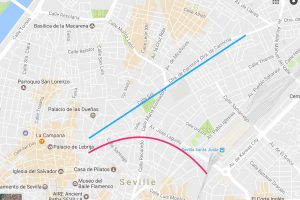 From Barrio Santa Cruz on the left, I was supposed to run up toward Calle Maria Auxiliadora, and connect with Avenida Jose Laguillo to head towards home, the pink line. Well I ran up a parallel street towards Calle Maria Auxiliadora, but at the point of that giant curve in the street, which dumped me out way far north, the blue line. What was supposed to be a 7 mile run turned into 10. But I got to explore Sevilla just a little more! Funny enough, I was never nervous. I knew I’d make it back to somewhere I knew. I was more worried about missing lunch, which I did.

25 people from my program ended up traveling to Lisbon that weekend. About half of the group was running the race. It was an absolutely incredible experience! We road the bus over from Sevilla to Lisbon, about a 6 hour ride. I met a man that does that every week. At the time, the economy is Portugal was really struggling. So he worked in Sevilla during the week, road the bus home to a little town outside of Lisbon to spend the weekend with his wife and children, and then road the bus all night Sunday night back to Sevilla for work Monday morning.

Upon arriving in Lisbon, we immediately went and checked in for our race and then explored the riverfront area. 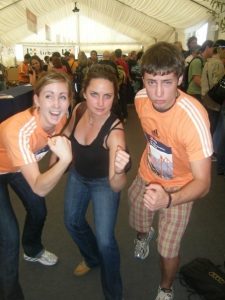 We got to see some of the course we’d be running the next day. We ate good food, good pastries, and just generally enjoyed the day in Lisbon. 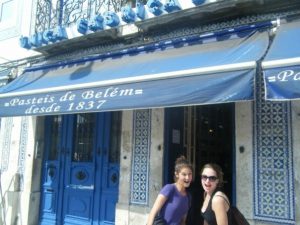 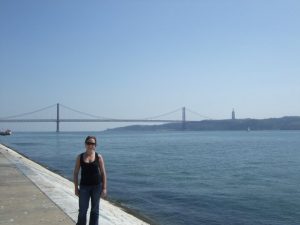 The actual race itself went a hell of a lot better than I expected! We started across the river at the Jesus statue, ran over the bridge, down to the waterfront, and ran a figure-8 into the finish line. No big hills or anything!

I was still SO nervous! It was the longest I’d ever run, and this race is legit! It’s one of the largest races in the world, so there are TONS of people from all over that have come together to run this race. Like some really serious runners. The one thing I didn’t really like about this race is that with the figure-8 course layout, I could see runners crossing the finish line as I was looping around for the other half of the “8.”

But what a fun way to experience my first half marathon, and to explore a new city! We got to start at the iconic Jesus statue, run over the bridge, and end at the beautiful Mosteiro dos Jerónimos Monument. 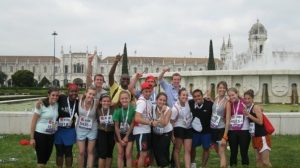 I started the race wanting only one thing, to finish without stopping to walk. So I paced myself really well. Too well actually. When I hit the marker telling me there was only 3 miles left, I realized I had quite a bit of juice left, so I kicked it into high gear.

The only thing I wish I’d done differently, other than pacing myself a little better, was buying new shoes when I started training. I brought used shoes to Spain with me, and continued to run and train with those. Shortly into the actual race, my feet started hurting like whoa! 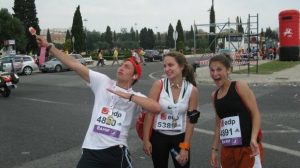 Some of the group had to hop on the next bus back to Sevilla (holy soreness!). The rest of us wandered around the city and ventured to the aqueducts. As sore as we were and as much as we were moaning and groaning walking up that huge hill, I think the adventures thoroughly helped prevent serious soreness from setting in. The desire to explore during our last evening in an incredible place helped to keep us moving. 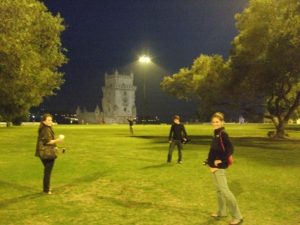 And then we got to collapse…

I ran this race before I really knew anything. I got my first pair of running leggings for this race. Didn’t buy new shoes for training. Didn’t have a handheld water bottle. No Strava or smart phone to track my mileage, pace, route, or take pictures. I just showed up, set my mind to it, and put one foot in front of the other!

I’m actually so excited about my upcoming half marathon! I haven’t run an official race in such a long time. My second half marathon was the Battleship Half Marathon my senior year of college. Then I ended up training quite a bit with Misty, my roommate in Colorado, for her trail half, but never did the actual race. 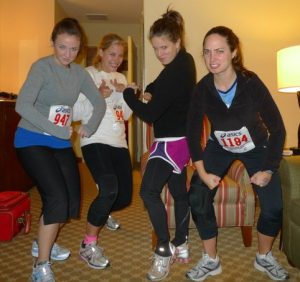 This time I’m coming into it in much better shape, knowing so much more, having better gear, and with a killer support system and training buddies. We’ll be gearing up all summer long with HIIT Yoga and the Summer Sweat Series at Flex & Flow, summer hikes and trail runs, cross training with swimming and SUP-ing when I’m at home… And then the main events for the EMPOWER Race Series and Molalla Trail Race! 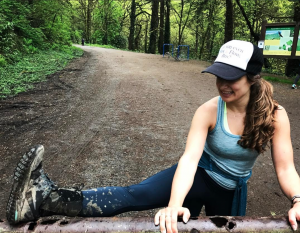 While we’ll be running the show at EMPOWER in SF, rather than physically running, it will be so incredibly inspirational and empowering being with all those amazing, sweaty women! (We’ll definitely sneak our own runs in, don’t worry!) Wanna join in on all the yoga and all the running in the Bay Area? Use the code FLEXANDFLOW for 20% off race registration at empoweredraceseries.com! Not in the Bay Area and can’t make it there that weekend? Sign up for the virtual race, too! 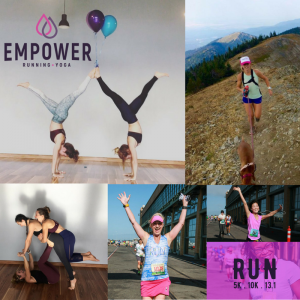