Nothing can really prepare you for when your worst fear comes to life.

I just had a conversation with one of my best friends from college about everything that’s been going on. She remembers me saying on numerous occasions that I could pretty much incite a panic attack at the thought of losing one of my parents in the near future. If (who knows, they’re adventurous, they could discover the source of Infinite Life in Jack Sparrow’s long lost cave in the Caribbean) and when they go, it’ll be 30 years from now quietly in their sleep after playing on the beach all day with their grandkids and drinking a bottle of Amarone. 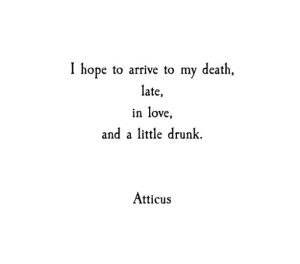 For those of you who don’t know, in December my dad was diagnosed with Non-Hodgkin’s Lymphoma. A rare form called “mantle cell,” to be more precise. In January we found out it was Stage 4. It is aggressive, incurable, but treatable. My dad went into remission after four rounds of chemo, the earliest possible timing that could happen. In June, he underwent a bone marrow transplant, a procedure paired with intense chemo that could give us years before it comes back and we have to fight again.

We’re 9 months post diagnosis now. The fight is going well, but still going on. We’ve reached a new normal, hopefully on the way back to the real normal.

When we found out, my dad immediately insisted that I not uproot my life and move home. So I continued on. Or tried to. I had my reaction, which, to put it plainly, was not pleasant, and then tried to continue on. I smiled, found things to laugh at, dated someone, traveled.

That doesn’t mean everything is ok, though. I totally have moments of feeling truly happy. But the fear, anxiety, uncertainty is always present.

I’m lucky enough that I was able to come home for a month after the transplant. It’s hard to describe this time period, this experience. Being in the bone marrow transplant unit with my dad, who sipped on milkshakes while cracking jokes with the nurses and fought against a ridiculous amount of pain. Not to mention he was exhausted from literally regenerating his whole immune system after the chemo killed everything off. After discharge from the hospital, we stayed close by in Chapel Hill in an approved hotel before he was fully discharged back home to the beach. Our whole world has revolved around medication charts, blood counts, cleaning procedures, and doctors appointments. (I cannot express how amazing our team at Chapel Hill was! All of the doctors, nurses, pharmacists, and staff were absolutely amazing, not to mention literally life saving!)

When trying to explain how I feel and what I’ve been going through, someone close to me labeled it “the vortex.” Time seems to disappear. What goes on around me is covered over by a film. My reactions seem delayed, forced, unenthusiastic, or some combination of all three. Sometimes it’s hard to motivate to do anything at all but sit on the couch and stare.

The easiest times are actually with my dad. Talking, watching a movie, bitching about Trump. It feels normal.

I don’t claim to be experiencing a fraction of what he is. His strength is unparalleled in my mind. Anyone that has someone close to them that has fought the vicious battle against cancer can claim this.

The strength of my mother is incredible. My dad and I joke that this has given her complete freedom to let her nagging flag fly (she says affectionately). She’s organized, clean and tidy, constantly moving, and a planner by nature. The perfect caregiver.

I’m the daughter of a man who was dealt the worst blow when he was the strongest, fittest, happiest I’ve ever seen him. An unfair blow to be sure. But as the doctors tell us, we are able to fight so hard and aggressively now due to the fact that he was so strong when this happened. I was not present at all the chemo treatments, doctors’ meetings, or daily battle of fatigue. But I continued as best I could because that’s what my dad wanted. I called multiple times a week, came home to surprise them at Christmas, again in the middle of chemo, and then for most of the summer after transplant.

But I digress. I didn’t want to talk about all the cancer things I’ve learned, or how amazing my dad is, or how scared I was when we found out he had cancer. I needed to put all of that out there so that what I did want to talk about makes sense. And because I haven’t really put it all out there yet.

What I really wanted to share is what I’ve discovered about how to interact with a friend or loved one going through something traumatic and heartbreaking.

People have taken a few strategies with me:

For me, I appreciate being asked about it and him. It lets me know that I’m cared about and thought of. I totally get that people don’t want to bum me out or bring it up if I’m not thinking about it. But as I explained it to someone close to me, it’s something that is always present for me. By not asking about, or at least acknowledging, something so obvious in my life, it makes me feel a little weird.

When people just keep telling me “it’ll be fine,” I don’t really know how to react. I do appreciate the optimism, but part of me immediately bristles. The reality is that my dad’s cancer is incurable. And I have a lot of fear. By constantly repeating, “it’ll be fine,” I feel like I can’t express those fears. Any Sex and the City fans out there? Remember when Carrie just kept saying those words to Samantha after her breast cancer diagnosis? Sam’s response was, “[But what if it’s not?] Let me talk about what I’m afraid of.”

I’m a pretty open person. When I can’t talk about something, I say so. So for me, the best approach has been, “Hey, how are you and your dad doing?” To the point. I’ve reached a point where I can talk about it without completely losing it.

But I know that doesn’t work all the time. Everybody handles things differently. But everyone needs a shoulder and some love. So if you’re not sure what someone needs or how to approach him or her about it, maybe try out, “Hey, I wanted to check in and see how you were doing with everything going on. I understand if you don’t want to talk about it right now, but know that I’m here for you and love you.” Or even just ask how you can best support them through this. It lets them know you care without being intrusive if that person isn’t ready to open up. Sometimes people just need to turn inward for a spell, but it’s always nice knowing your loved ones are there.

When I got home in June, the beach was a place of solace for me. I could go out and sit in the heat, the sand, the sunshine, listening to the waves and give over to that fog. I was quiet more than I wasn’t, which is very unusual for me. My body hurt. I felt so lethargic all the time. After months of fighting against all of that to continue on with normal life, I gave in to it. People kept asking if I was ok, not used to seeing me like this. Part of me wanted to stare at them and ask if they were crazy. “Of course I’m not ok! How could I possibly be ok?!” I wanted to shout. Part of me acknowledged that this was just a natural reaction to all of the emotion and anxiety we had been going through. I wasn’t really ok, but it was ok.

Everything that I laid out is totally personal and only from my experience. But the point is to talk to your loved one. Ask what he or she needs. Maybe it’s to not talk about it, maybe it’s expressing deep fears, maybe it’s making jokes. But letting him or her know that you’re there for her in whatever capacity, that you love her, is what’s important.