I was inspired last night. I saw a video of my friend and student Christy Prior flowing between Sundial and Flying Splits, and looking gorgeous and effortless with it. I realized how long it had been since I’d given Sundial a go. I think it was even back in 2014 when we took the following picture together: 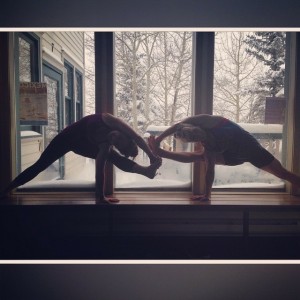 I gave it a go this morning. Sundial is a pretty darn advanced pose. I have to be super prepped for it. We did a lot of hamstrings work in my class this morning (working toward a variation of this posture). And this is what happened:

I was able to lift my foot up, no problem. But the extension was in no way going to happen. For many reasons: It was 8am. I had practiced some with my class, but still wasn’t as warm as I could/should have been. My rib didn’t feel strong enough to support me here, even though my left side is the one I can usually do this on. The attempt on my right side went a lot better, but I still fell out into Lizard (yay for having an exit strategy!).

It brought to mind this incredible phenomenon: once you’ve “done” a hard pose, you don’t ever have to do it again. It’s as if it goes under the “accomplished” column of your practice and you don’t have to keep practicing it anymore. Hardly the case! As evidenced by this picture. I’ve been practicing way more regularly lately than I was back in 2014. But I haven’t worked on Sundial in a heck of a long time. Just because I’ve done a pose doesn’t mean I can stop working on it. There are always new variations and transitions to play with even if you feel as though you’ve got a good handle on the alignment of a pose.

Lesson: You can’t accomplish a pose. There’s no checking it off in Light On Yoga and then writing it off. It’s always a continuous practice!