Ok that’s a little bit of an exaggeration, but right now that statement is true for me.

It’s springtime here in Portland. Which means some days of torrential rain and wind, and some days of 65 and sunny. Sometimes it swings from one to the other in a matter of hours! That means running season is here! (Though to be fair, we do run year round. That’s dedication. Just sayin’.)

I’m trying to enjoy it, but it just doesn’t seem to be happening for me. Running is one of those activities that when it feels good, it feels perfect. And when it doesn’t feel good, it f**king sucks. And over the last few weeks, it hasn’t felt all that good for me. 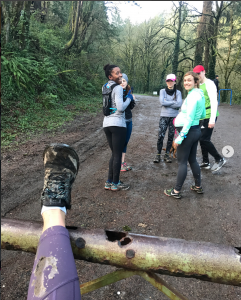 I’ve been pretty open about having some hip-knee thing go on lately. I still don’t really know what it is, and it comes and goes in waves. Sometimes it’ll be sharp pain in my knee, sometimes it’ll be an ache in my outer hip, and others it kind of pulses in my hip flexor. Sometimes there’s nothing. Every time I think I get a handle on it, it flares up again.

Before I left for home back in March, I’d been very focused on form during my runs. Smaller steps, more engaged core and glutes, aligned knees. My trail run before traveling and then my road runs at the beach were some of the best pain-free runs I’ve had in a while. 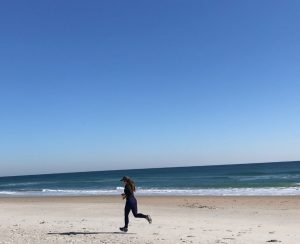 And then when I got back to Portland I got sick almost right away. Between that and then moving, I’ve just been down for the count. I thought I was getting better after only a few days of fever, but it turns out that physically moving your own house (though big shout out to Casey for helping me move my bed and big bookshelf!) only makes you sick for longer.

Last week I went on my first run in two weeks. It was only 3.5 miles, run commuting downtown to teach yoga. I coughed up phlegm the whole time, but it felt so good to get my body moving again. Plus, the sun was actually out and shining!

The next day both of my knees felt weird and creaky. Not that surprising with it being my first run in two weeks, but they still do!

I’ve rested and stretched, switched up my shoes and my terrain, done yoga and PT exercises… For some reason my knees still hurt and my hip is aching.

For those of you who want to tell me to just not run, it also hurts in yoga, when I try to do PT exercises, cross-train, walk up and down the stairs in my house…

So I feel a little lost at the moment. The first mile and a half of a run will feel great, and then things start to bother me. Lunges during a flow class feel tweaky. Squats are no bueno. I feel like I can’t do anything!

I know this will pass, but in this moment it’s freaking frustrating. I do NOT have time for this! I have spring and summer to enjoy, mountains to climb, and races to train for!

Running in the spring is one of my favorite things to do! Sun is shining, and it’s finally warm enough to break out the shorts! You know that feeling of the first run of the year in shorts after months and months of wearing leggings and sweats? It’s so freeing! I just had my first shorts run of 2018 on Tuesday, and it felt glorious!

Legs, meet sunshine. I know it’s been a while, but I think you three are going to get along great. . . After a morning of torrential rain, I couldn’t not run the two miles downtown to teach with an afternoon of sunshine, blue skies, and warm temps.

Not only do I just want to be able to hit the ground running and let my bare legs and arms fly, but I’ve got plans that do NOT require pain.

First up, the Gixo 5K / 10K! On May 5th, runners from everywhere will tune in to run together. You can join in literally from anywhere, that’s the beauty of the Gixo app! My Flex & Flow runners will be doing this run together IRL in Portland, OR, but I’ll be tuning in while in Rome. Of course, subbing out post-race celebratory Cinco de Mayo queso and chips for some fresh Italian pizza… Even better? Gixo is offering a FREE training program to get ready for the big day! Wanna try out the Gixo app? Click here to get a 7-day free trial! 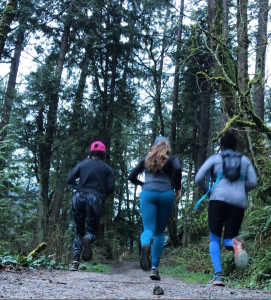 Training and running with the Gixo app is great for motivation and accountability! #tbt to that time I had a virtual run date with my favorite sweat dates from all over: Jamie and Nic from PDX, Carleeh and Autumn from WA, and Kelsey from CA. We were all running alone but were able to feel supported, inspired, and a little bit competitive together!

I had the best run date tonight commuting downtown! I got my miles in virtually with @jamiekingfit @yoga.by.nic (even though we live in the same city), @healthycarleeh @awholestory (my #sweatpink sisters up in Washington), and @kelseymstout (one of my fave running buddies who had left us to travel the world and tuned in from California). All the while, Coach Aaron was in my ear (via headphones) pushing me into “the green,” continuously quickening my pace throughout the 3.5 miles, and keeping me in line with my form. Thanks squad for the awesome run! It truly helped make me feel LIMITLESS! . . #iamlimitless #sweatpink #gixofit #runpdx

In July I have my next (and second ever) trail race: the Mt Hood 25K. This will also be the longest distance I will have run, ever! The benefit to this race is that it is trail, so way kinder to my joints. But elevation gain is definitely going to be a factor. I was so proud of myself for running the whole time during my Molalla Half Marathon last September, but this one will probably include some hiking spurts… 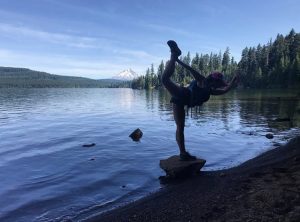 The week after my Mt Hood race, Caitlin and I are flying to Norway! (Might need some compression socks for that flight.) After two days of acclimation in Oslo, we’re spending a whole week in Lofoten, a really remote island up north, where we plan to hike a lot. 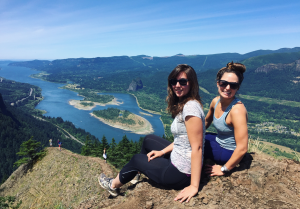 So you see, there is NO time for bum knees, hips, and not feeling 100%. Now is the time to be ramping up mileage, sweating my butt off, and getting ready to run and hike the summer away!

Dislcaimer: This post was sponsored by Gixo. All opinions expressed are my own. I truly appreciate all of the brands that support the Sweat Pink community.