At this point you’d have to be living under a rock to not notice the tension in the air right now. Since the election, all manner of emotions have been running high. No matter the side of the political spectrum you’re on, the tension is palpable. [Disclaimer: I am not making a political statement here, simply recognizing a tumultuous time in the US. I’m more than happy to make more decisive statements over wine later… ]

I’m very selective about what political statements I make online. I don’t like politics. There, I said it. They’re a very unifying or dividing topic. And often get in the way of the real issues. I strongly dislike conflict and prefer transparent communication that often seems absent from politics. So that’s why you’ll rarely see me sharing the latest political cartoon bashing some Washington muckity-muck that I just know will spark a righteous debate in the comment section.

Don’t get me wrong. I love conversing with people of differing backgrounds and opinions and discussing hot button issues. Religion, economics, abortion, gun control, the environment, travel… I have an opinion about it all. But here’s the thing: I will only talk about those issues face-to-face with people I know will actually listen to my opinion just as I will their’s. I’m pretty good at playing devil’s advocate. Even if I don’t agree with something doesn’t mean I can’t understand how someone could think that.

BUT… One thing I don’t understand is the resistance to unity. The idea that we are all in this together and the only way to succeed is to work together as equals.

Last Saturday I attended the Women’s March in Portland. 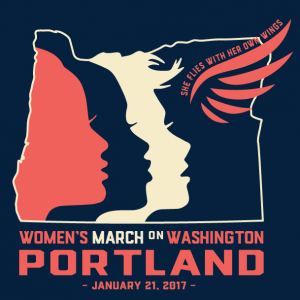 I was going skiing. After teaching class that morning, I was planning on some much-needed solo time in the woods. But the energy was impossible to ignore. Everyone I talked to was going downtown to join. Pictures poured in from friends and family all over the country from marches they attended. I realized this isn’t just a D.C. thing that protest-loving Portland was tagging along to. This was a Historical Moment, one that I would look back on and want to have been a part of. This was a B.F.D.

We united for @womensmarch on 1.21.17. Yeah, it was kind of a big deal. #girlpower #iamempowered

Of course there was some Trump protesting going on, but the root of the movement was to rally for something that truly benefits us all, for women’s rights and equality. This is an issue that spans across ethnicity, nationality, sexual orientation, political party, and religion. [Check out the reasons this pro-life Republican stay-at-home mom joined in on the march! It wasn’t all hippie feminists.] These issues of gender equality affect us all. 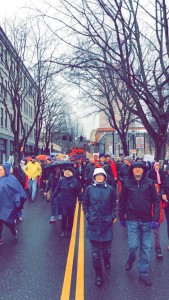 Time for some stats:

What can we derive from these facts?

We are NOT ok not being considered equal! @womensmarch #girlpower #iamempowered

As Aziz Ansari said in his opening monologue for SNL that Saturday night, an entire gender (and then some! Thanks girlpower-believing, men!) has risen up in protest at some of the decisions that are being made for them.

Isn’t that the root of it? We are women, hear us roar! So let us make the decisions. If we want to work, we deserve the same paycheck as our brothers. If we want to be moms, let us (with our baby daddies) choose when the right time is. If we wear a skirt, put on makeup, simply breathe, that does not mean we want to be grabbed; we will let you know if/when we want that. Yeah, consent is king. 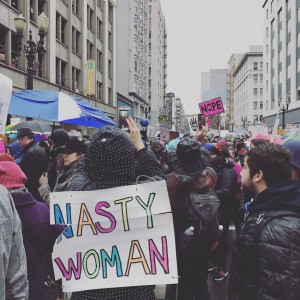 This is not a small group of people demanding these rights. It has been reported that 673 marches were held worldwide! Sydney, Paris, Buenos Aires, Kolkata, Lebanon, Malawi, all over the US, and even Antartica. [4] I heard that close to 750,000 people turned out in Los Angeles. Amazing attendance, creative signage, and completely peaceful!

It was estimated that 20,000 people would show here in Portland and over 100,000 turned out! [5] Rain and crazy traffic didn’t stop people from taking over the streets and waterfront park in downtown Portland to make a statement for the cause. My three girlfriends and I walked up to the crowds and immediately became one with movement. Chants, signs, costumes, props, men, women, children. All were present. All were unified.

My gaze constantly shifted, trying to take in as much of the stimuli as possible. The signs, oh the creative signs… 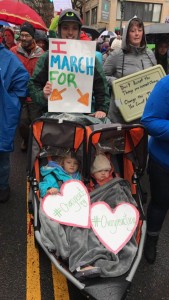 Down in the Waterfront Park, a stage was set up and people congregated. A DJ was playing dance music. After marching through the city streets, people broke it down! Dancing outside in the rain and mud with 100,000 people of every gender, age, race, occupation, and any other “group” you could think of, and all in honor of women’s rights, was an experience I’ll never be able to forget.

Never before have I been a part of something like that. There was anger, fear, and uncertainty present, yes. But the amazing thing is that it left us feeling … hopeful! Inspired. Empowered.

As Aziz said again, it takes big groups of angry people to enact change, and if day 1 is any indicator…